You are here Travels with NessieU. S National ParksAztec Ruins 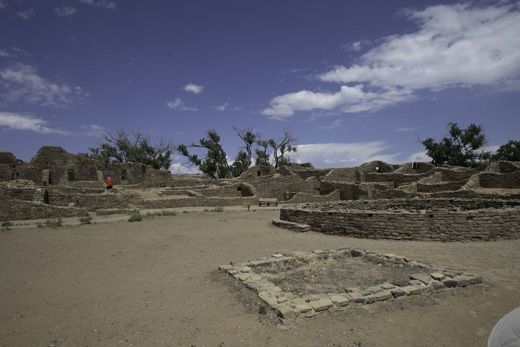 Aztec Ruins is a large complex built around 1100 by the Ancestral Pueblo and abandoned around 1300. It is an amazing place. The portion open to visitors, called the West Ruins, once had more than 500 rooms and 28 Kivas centered on an open plaza. It is about 2 miles long and 1 mile wide. There are four separate archaeological sites to the east that are unexcavated.

The ruins are called the Aztec Ruin because early settlers thought that the were built by the Aztecs from Mexico. The complex was built by the much older Ancestral Pueblo civilization.

The overview picture doesn't do justice to the scale of this place. Or the amount of work that went into the construction of it. The evidence is that the site was built in about 30 years. All the construction material was imported from the surrounding area--every rock and wooden beam--because none of the material was located locally. Just think about it--all the work by humans carrying every rock and wooden beam by hand without the wheel or any animal help other than the dog. 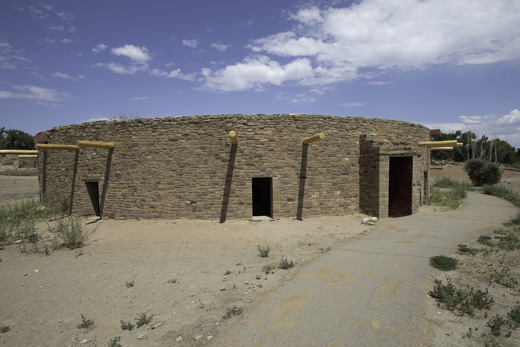 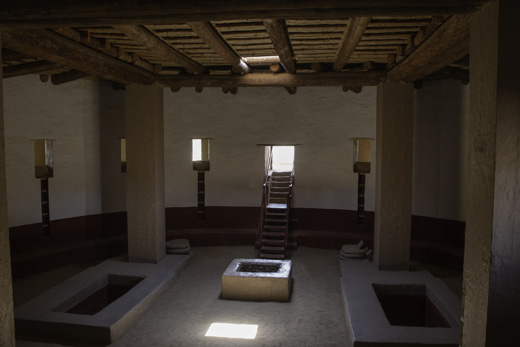 The great kiva was excavated in 1914 by Earl Morris a was reconstructed 13 years later. It is the only fully restored great kiva in the world. There is an un-restored great kiva as well as several smaller kivas at Aztec ruins. It is generally assumed that the kivas were communal spaces. 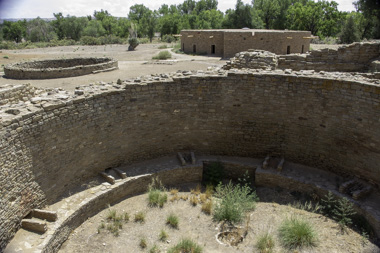 Un-restored Kiva with Great Kiva in the background

You can walk through some of the rooms at Aztec Ruins. Some of room still have the original roof constructed with timber hauled from about 30 miles from the site. Some of the beams are quite large and must have required several persons to transport.

The site was constructed with considerable care and planning or about 30 years. The quality of the corners in the various rooms is an example of the careful craftsmanship used building the buildings here. The corners are squared better than those found in many buildings today. 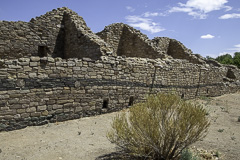 This is a fascinating place and well worth the visit.

Aztec Ruins is located in the town of Aztec New Mexico and is about 13 miles northeast for Farmington, NM.