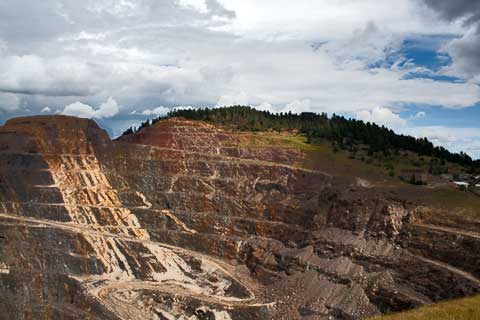 Lead, SD is home of the Homestake Gold Mine. The mine is a huge open pit mine in more or less the center of town. Before its closing in 2002 Homestake Gold Mine was the oldest, largest and deepest mine in the Western Hemisphere, reaching more than 8000 feet below the town of Lead. 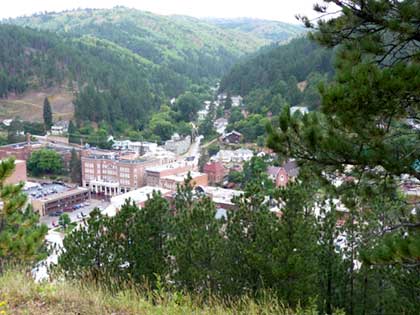 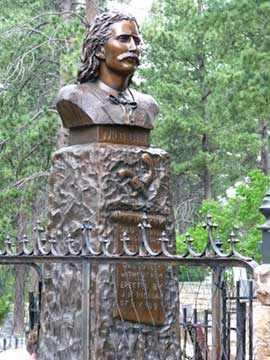 Deadwood is the more famous of the Lead/Deadwood towns. Most of its fame is due to Wild Bill Hickok. Or rather due to the fact that Deadwood was where Wild Bill was shot and killed while playing poker. Wild Bill is buried in the Mount Moriah Cemetery overlooking Deadwood. The grave marker read J.B. Hickok Died Aug 2, 1876 by pistol shot Aged 39 years Custer was lonely without him Erected by J. J Piordan of N.Y. 1891

Wild Bill has been the subject of movies and novels and it's hard to determine what is fact and fiction. Even when he was alive, he was the hero of dime novels and other fiction. If you're interested in learning more you can start Wild Bill.


The original grave marker is now at the front gate of the cemetery. 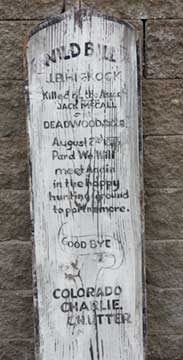 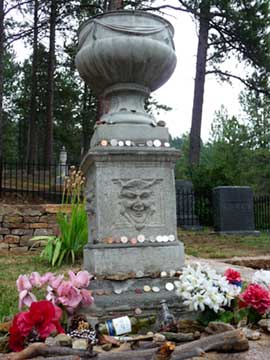 Calamity Jane, another famous character from the Wild West, is buried next to Wild Bill. The exact nature of the relationship between Calamity Jane and Wild Bill is not clear. She claimed they were married and some of his friends claim he despised her and that they buried her next to him as a joke.

Admirers of both visit the grave site and leave behind bottles of booze and flowers.

A tour of the cemetery provides a history of Deadwood.

There is a large Jewish section of the cemetery evidence of the large Jewish community that existed in Deadwood. They were afforded more rights and equality in the rough frontier town than other places in the country at the time. Many of the inscriptions are written in Hebrew.

One section is labeled that Mass Grave site. This is the grave for the eleven men killed when a lumber mill burned down.

The saddest section is the children's section. The large number of children buried in Mount Moriah are sad evidence of the typhus, cholera and small pox outbreaks.

The Chinese section is the strangest section. According to the sign marking this section there is only one Chinese grave left in the cemetery, for Hui ta Fei-Men. All the other Chinese buried there were disinterred and sent back to China to be reburied.

There is a small veterans section. Civil War and Indian War veterans are buried here. The gravestones were supplied by the United States Government. 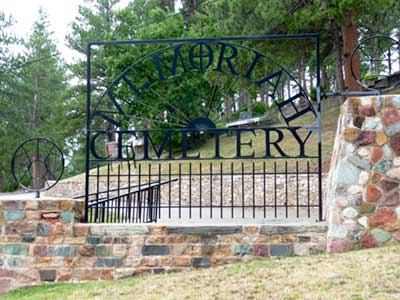